Bali and Hinduism in Indonesia 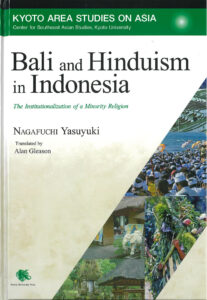 28. Bali and Hinduism in Indonesia: The Institutionalization of a Minority Religion

Why is Bali the only Hindu island in Muslim Indonesia?
Although Indonesia is overwhelmingly Muslim, the population in Bali is 90 percent Hindu. In Bali and Hinduism in Indonesia, a comprehensive study of Hindu society and culture in Indonesia, Yasuyuki Nagafuchi examines Bali since the precolonial era and details the development and institutionalization of Hinduism as an official religion.
By analyzing how Hinduism continues to respond to changes in Bali and throughout Indonesia, this book explores the relationship between religion and the state, and traces the history of Parisada Hindu Dharma, Indonesia’s most representative Hindu organization. From its founding to its rupture at the beginning of the twenty-first century, the author provides a complete history of Parisada and examines the conflict and contradictions between a religion based on Balinese rituals and ceremonies and Hinduism as a global religion. In doing so, this book identifies the unique characteristics of Hinduism in Indonesia today.
(Trans Pacific Press website)